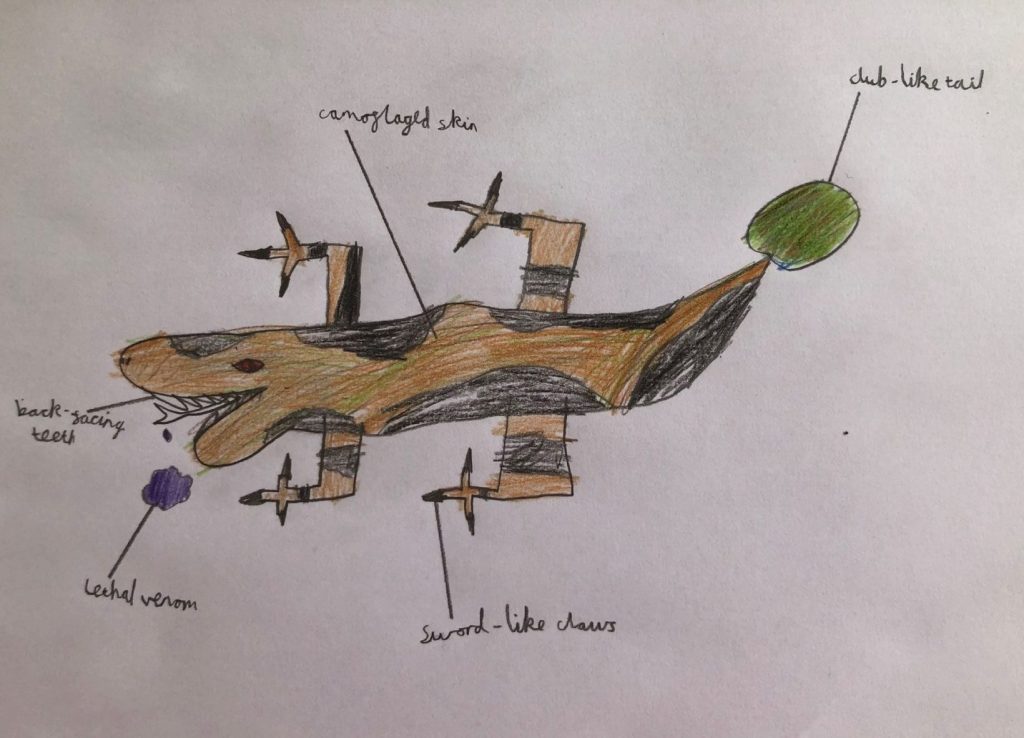 In English, over a number of lessons, FIII pupils have created and written their own explanation text on a deadly creature. They have created their own beasts, often by combining animals they are familiar with. Today, the children were asked to write their concluding paragraph, redraft the whole piece of writing and complete a checklist of the key features used.
Previously, the children also created their own poems. Here are just a few examples of their super writing work from the last couple of weeks.

TELL ME A TIGER
by Max

The enormous, rare, ferocious and brave
tiger is a creature to be feared.
The Panthera tigris.
A dangerous creature to watch out for indeed.

The tiger is a beast of the wilderness
lumbering through the jungle.
It is a sight to behold,
Only truly believed when captured with our own eyes.

His frighteningly monstrous size casting a shadow so wide.
You are surrounded
by a sea of sunset orange and black.
His underbody a blanket of snowy white fur.

Piercing yellow eyes, staring through his prey
ready to tear at your flesh,
A sumptuous meal.
You cannot escape his frightening, gleaming white canines.

A wild beast of the canine family but do not trust
this terrifying, cunning and devious cat.
He will be your hunter.
Camouflaged, stalking, prowling and ready to pounce.

MY DRAGON
by Rohin

My dragon breathes lightening like a silver tornado.
His breath is steaming hot, burning flesh as it hits.
His flames swiftly fly through the strong wind.

My dragon is as black as night.
He can’t be seen because he’s out of sight.
He prowls silently like a panther in the shadows.

My dragon has a deadly tail.
One swipe will knock you out.
He swings it side to side.

My dragon hunts like a wolf, sneaky and cunning.
He hunts plump, tasty prey.
His favourite  meal is juicy, fresh buffalo.

My dragon lives in a dark, mysterious cave.
He powerfully rules with his iron claw.
He’s the alpha King in the world.

My dragon is loyal to me.
We always fight skillfully by each other’s sides.
We make the best team when we battle.

What makes the Gilodo Mongon most deadly creature around?
by Max

Imagine a vicious and cruel cannibal lizard, the largest of its kind. You won’t find anything that can beat it. It is a fast and deadly predator, a vicious and cruel blood-thirsty monster. It sneaks upon its prey by using its camouflaged and scaly skin, then it strikes using pure and brutal force. It is a poisonous creature that injects venom as it chews through the flesh of its enemies. The longest venomous lizard alive, it hunts its prey with speed and an unexpected lunge. You are thinking of the Gilodo Mongon! In this explanation I will be explaining exactly why the Gilodo Mongon is by far the deadliest creature our planet has ever encountered.

The first thing I will be describing to you is the weapons of a Gilodo Mongon and why they should terrify you! The Gilodo Mongons jaws are lined with back facing, hooked and terrifying teeth. It is able to inject venom when he bites his captured prey, paralysing it with one snap of his jaw, hacking away at the flesh. With a mighty club at the end of his tail, it can knock prey dead with one swing before devouring his meaty feast. When he senses prey nearby, his scales are able to stand up like needle sharp spikes, you wouldn’t dare brush past his skin without a layer of armour to protect you! While it lumbers through the dark wilderness, it sharpens its already sword like claws among the blunt stones the size of boulders. His weaponry cannot be challenged!

The next thing I will tell you about is his monstrous appetite. A Gilodo Mongons appetite cannot be rivalled by any other creature on this land. If you aren’t afraid of his appearance then his appetite will terrify you. They can eat up to seven meals a day! He uses his own body weight, five tonnes, to rip apart chunks of his prey. One meal can be a small elephant, one that unluckily couldn’t escape his claws, he can unhinge his jaw bones to take an animal that size down and devour it in one gobble. At least he can hinge his jaws back together after, ready for his next meal! Unbelievable! His favourite prey is mule deer but he really isn’t that fussy, he will eat anything huge and meaty. However, don’t be fooled, he would happily eat anything of any size just to banish it from his territory. If food is scarce, Gilodo Mongons can store fat in their deadly club like tail, so you don’t have to worry about its survival, he is indestructible! 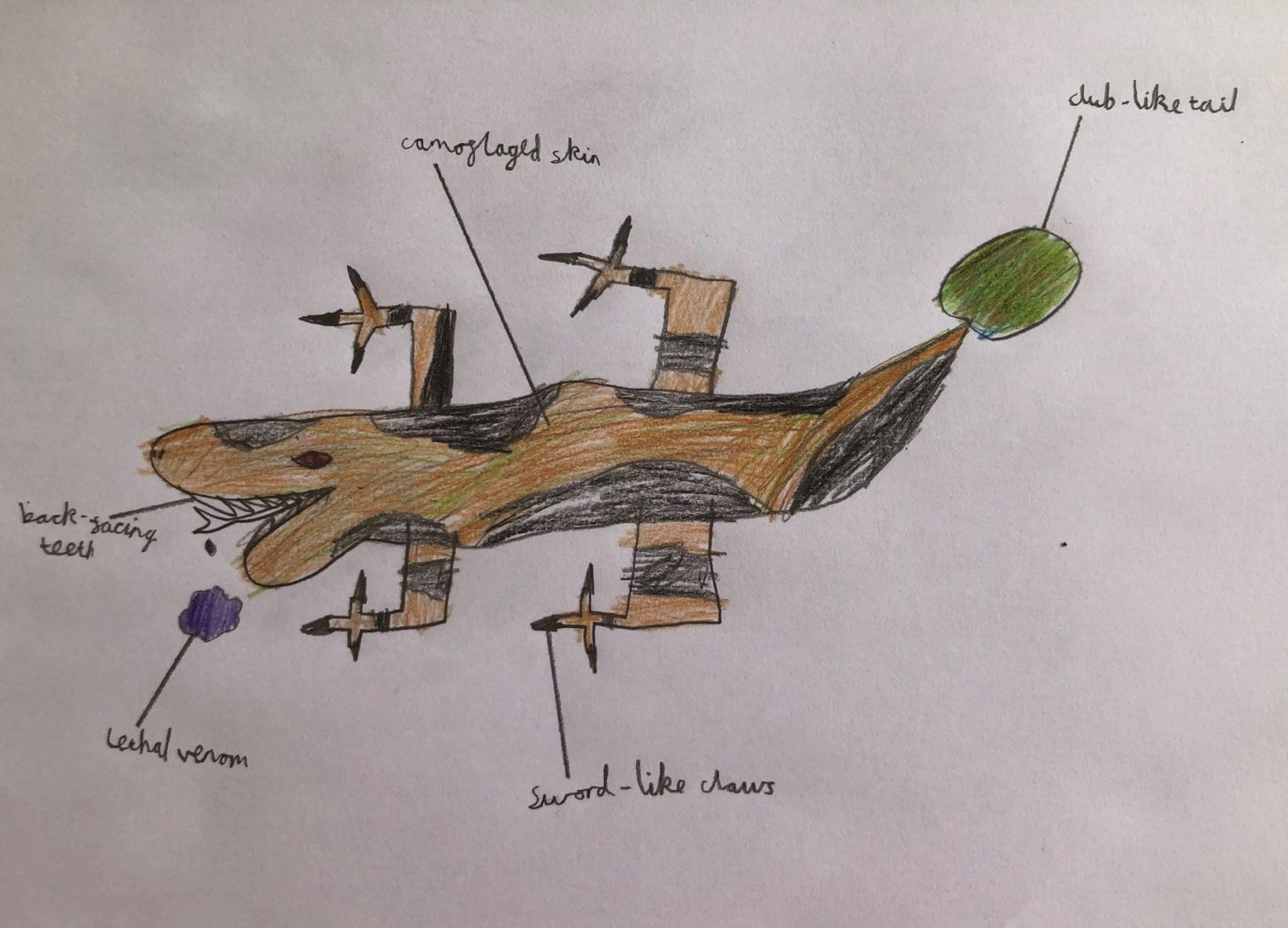 This sly and deadly creature crawls through the forest and is ready to catch his prey. The teeth in his jaws could snap your bones in half. The legs can run as fast as a shooting star. This deadly animal has a crocodile’s head and a cheetah’s body. Let me tell you about my creature that is the most vicious attacker in the world.

The Croctah is hiding in the long, wavy grass by the water. He is waiting to pounce on his prey. His eyes can turn all the way around and his sharp teeth shines through the grass. Its long nose detects prey from far far away. His ears can hear their babies calling inside their eggs. He can nm up to 60 miles per hour. He is the fastest land mammal on in the world. The Croctah’s long claws dig into the ground to sharpen ready to catch their prey. He has long, muscular tail that has a flat shape and can strangle the enemy.

If you are looking for a creature that can gobble its prey, run faster than a bullet and is stronger than a grizzly bear. Then the Croctah is your deadly animal who is alive today. When you see him you will shake with fear before he jumps on you and bite your neck in half. 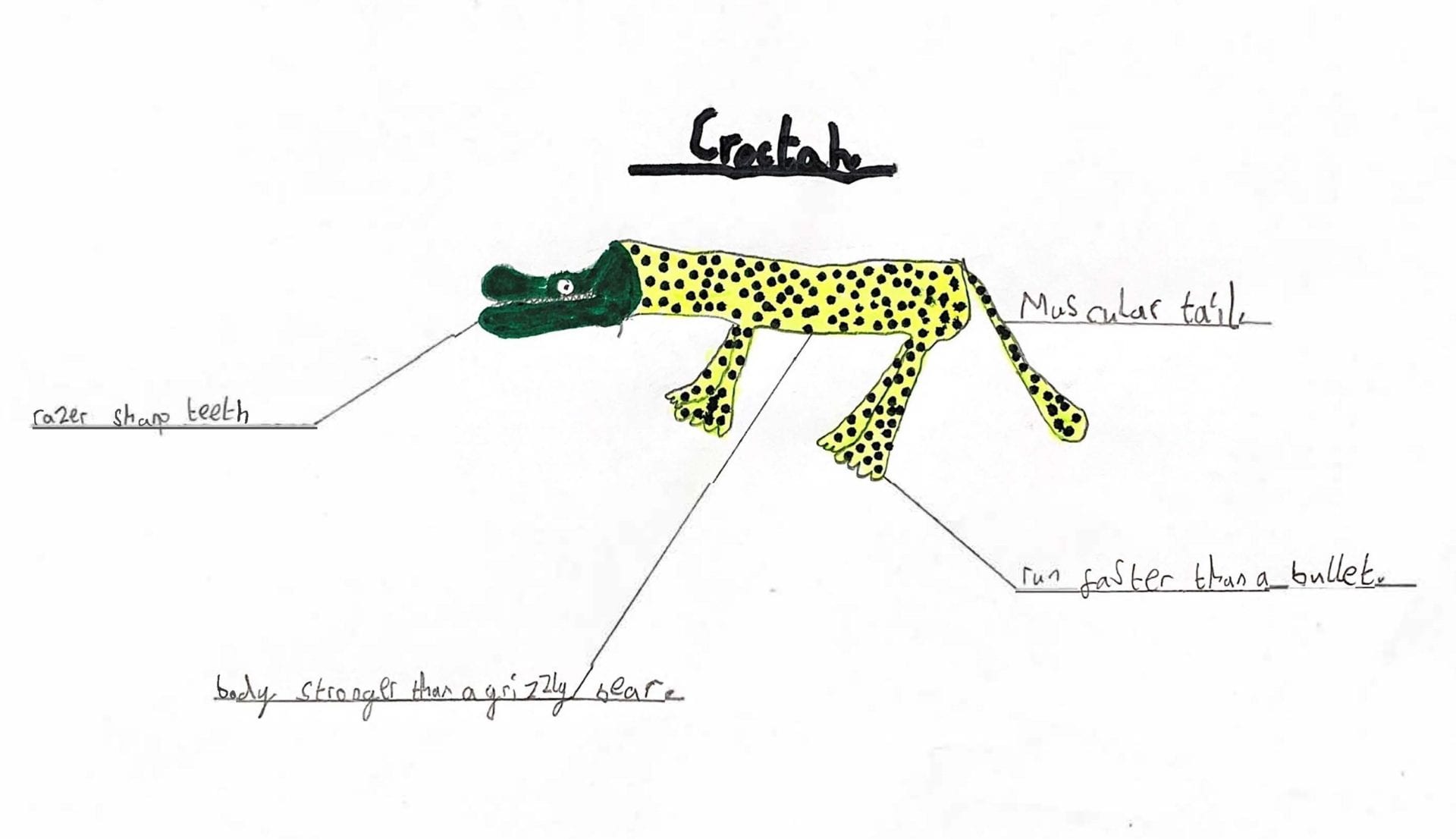 How is the Deadly Dragon the most dangerous creature on Earth?By Rohin 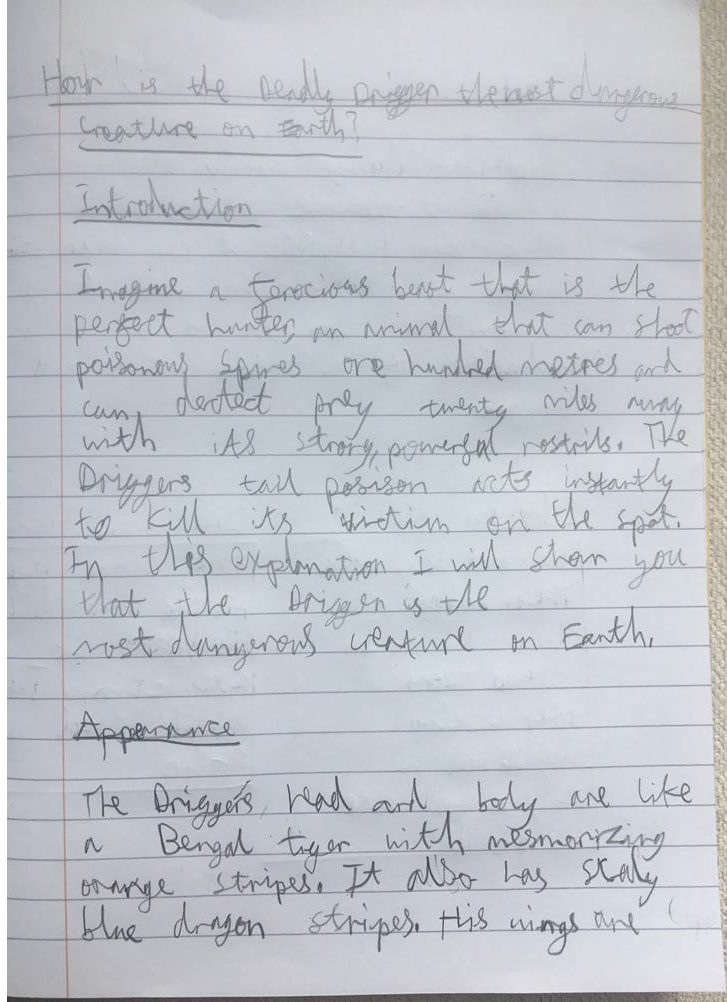 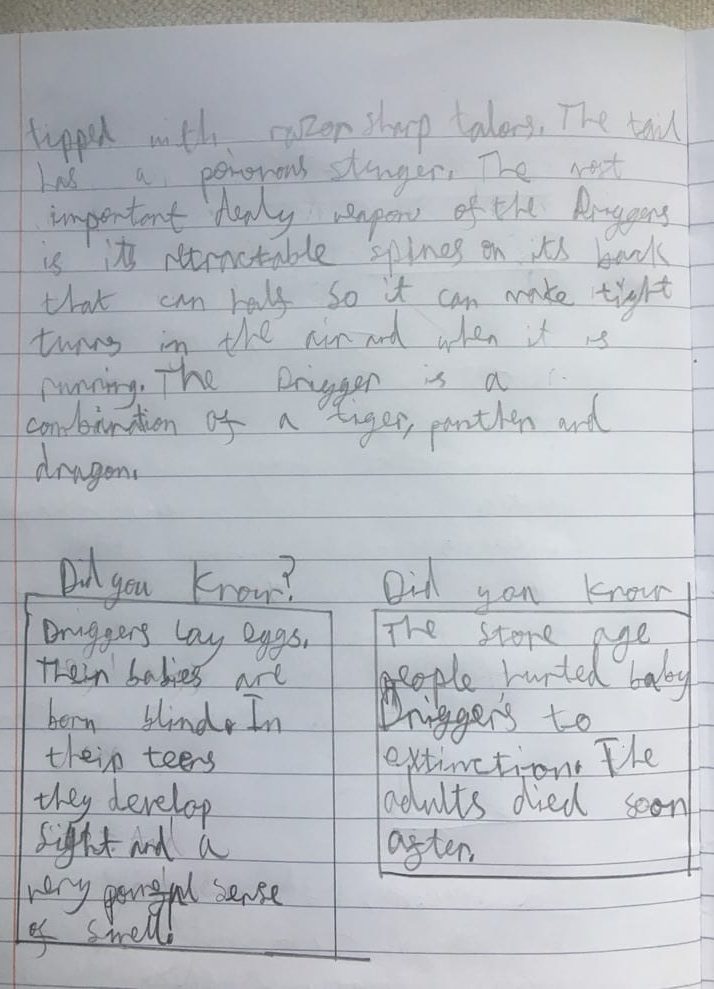 Most DEADLY creature? Sure!
By Ethan C 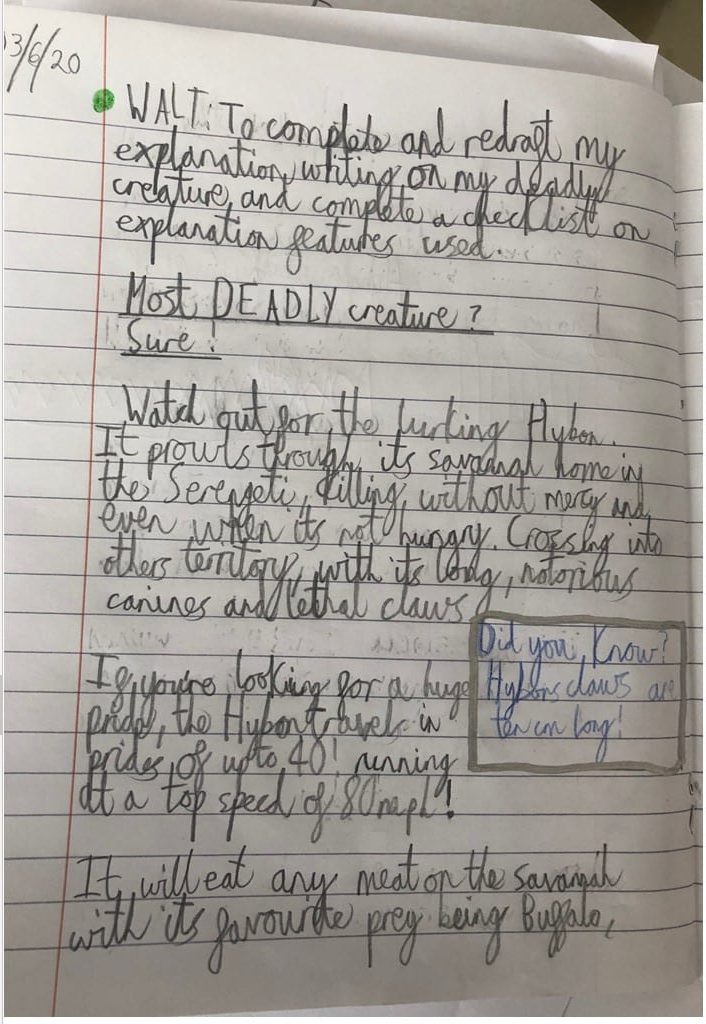 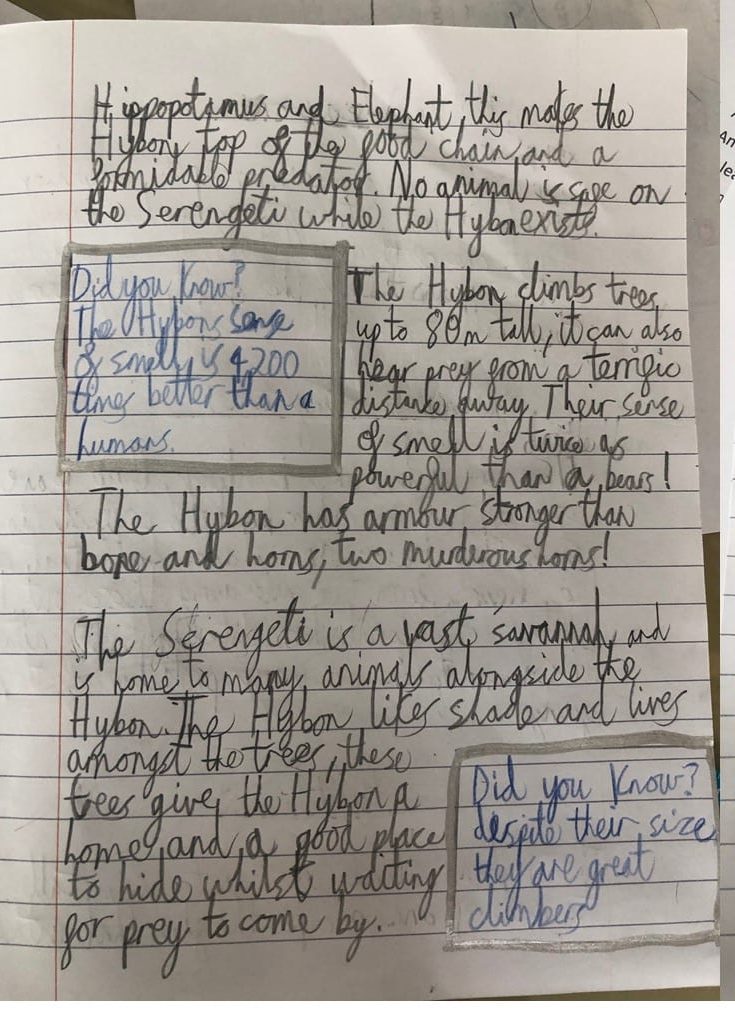 What is the jelly-shark’s habitat?
By Alice D 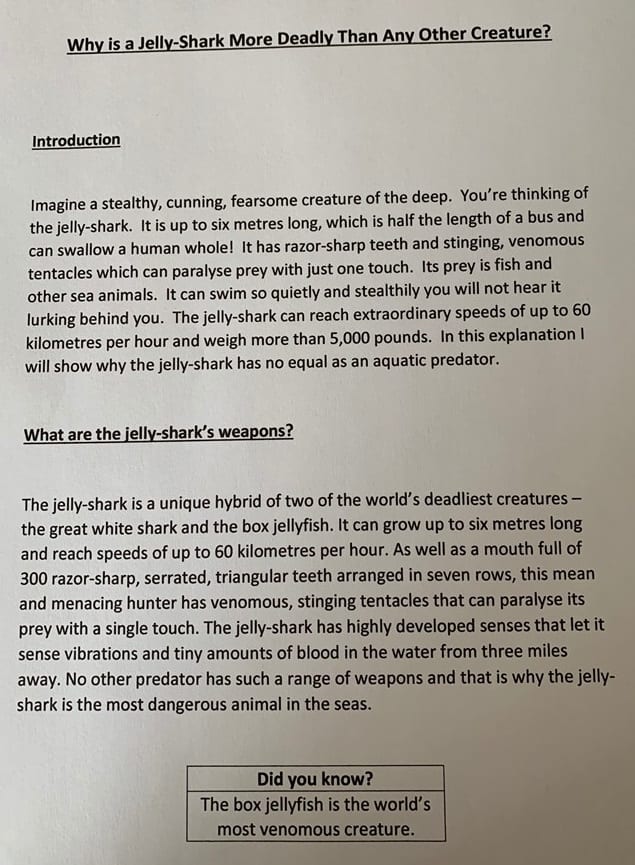 The deadly Jellyfishsnake of sea
by Tallulah 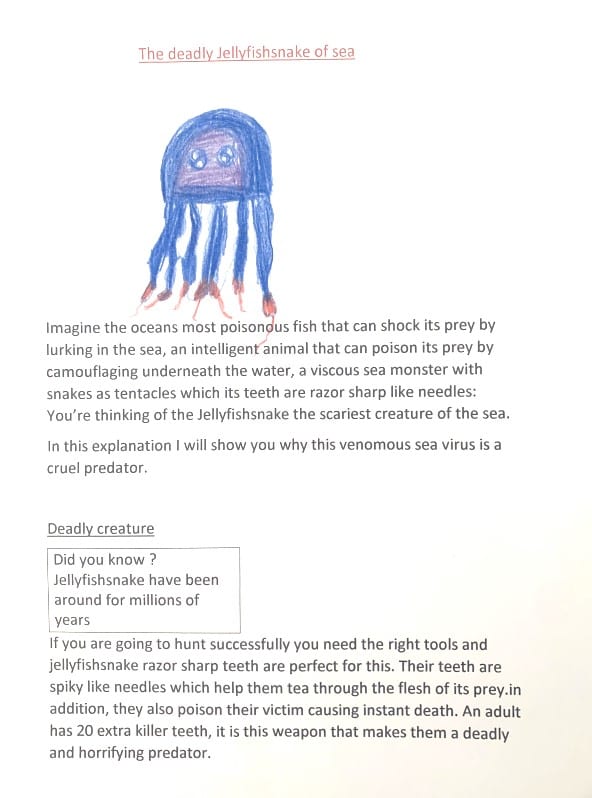 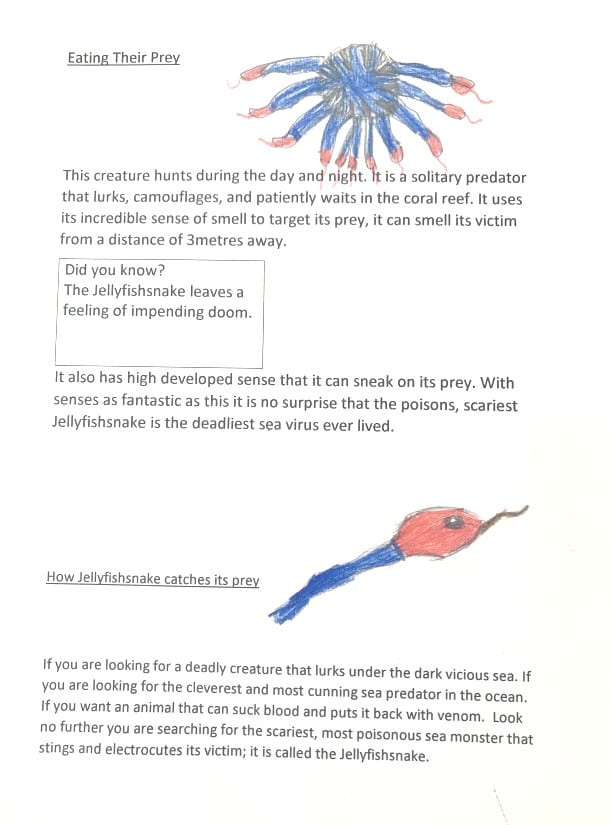